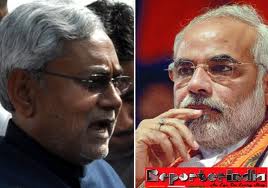 Nitish Kumar, the chief minister of Bihar set aside all speculations of him running the race for prime ministership in the 2014 general elections. A section of the opposition, National Democratic Alliance (NDA), had proposed his name but his rejection comes in the wake of Narendra Modi’s name being egged.

The well wisher he is referring to is Janata Dal United (JDU) leader and Bihar State Planning Board Deputy Chairman Hari Kishore Singh. Singh had quoted that Nitish is a suitable candidate for the highest elected post in India.

Singh had apparently stated that the bride, although if ready, may not openly come out claiming the readiness. He was referring to Nitish as the bride and the marriage as prime minister candidature.

The JDU leader had also cautioned NDA leaders of a possible disintegration within NDA groups if Modi was to be their choice.

It is an open secret that Nitish Kumar dislikes Narendra Modi for his own survival in politics. Modi is a Hindutva strongman, allegedly linked with the infamous Godhra riots where muslims lost their lives. Nitish’s vote bank consists of a good majority of muslims. So, supporting Modi openly is like digging his own grave, although the two might be best of friends behind the scenes.

For NDA, it is best for them if a compromise is met between the two best chief ministers in India and they have a realistic chance of taking the power from the Congress under the leadership of Modi, who has charmed the world with his vision, mission and antics.