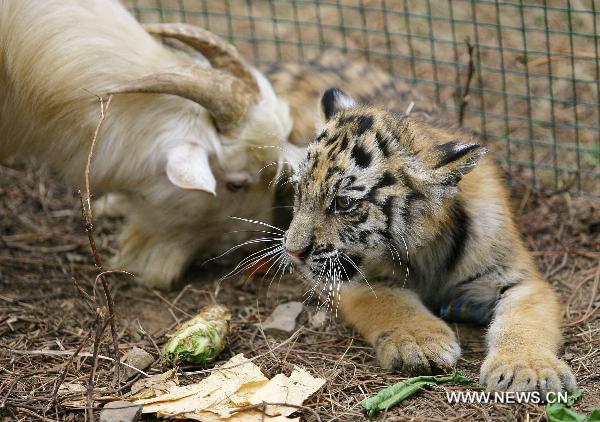 Bizarre is the word of the day! A tiger in Bor wildlife sanctuary has declined to eat a goat which was released just for the purpose of hunting and eating. Instead the male tiger chose to be pally with the goat by pushing it in the waterhole and playing with it.

The forest authorities waited for two whole days for the tiger to kill the goat and devour it. The tiger in its hunger state chose not to eat the goat, instead suffered through its hunger. Finally, being fed up, the officials pulled the goat out and fed the tiger with beef, which it happily consumed.

The same goat was pushed in a cage which contained the tiger’s female siblings and within no time, the tigresses made a quick kill and ate it.

All the three tigers were rescued from the Dhaba forest range in 2009 after their mother went missing.

Bringing a live goat in the cage is a means of honing and testing the hunting skills of the tiger. While the male has not developed any of its prominent DNA, the tigresses seem to be ready to be let free in the forests of India.

The lack of hunting skills could be attributed to training by their mother. Experts believe that the mother teaches the cubs the tricks which make them better hunters.

Alas, this male tiger will perhaps have to spend the rest of its adult life in zoos, as wildlife conservationists do not believe that the animal is capable of surviving in the wild. For all we know, it might see a human in the forest and expect him to throw a piece of meat at it.