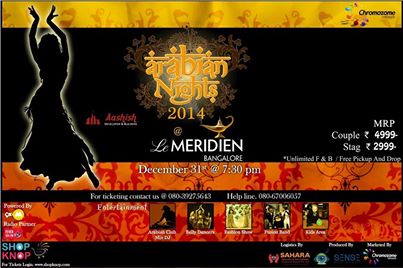 Le Meridien has hit low depths on the 2014 NYE party. The much advertised Arabian Nights, organized with Chromosome Networks was mired with not keeping up to commitments as promised during the ticket sale.

For starters, the party organizers promised free pick up and drop and none of the ticket holders got picked up. When they started calling the offices, cell phones were turned off and calls ignored.

The hotel had advertised that every ticket holder would get a gift voucher worth Rs.5000 during the party. Later when asked during the party, they feigned ignorance having made such a promise.

The advertisements read belly dancing, fashion show among other entertainment factors. They had a 40+ year old lady dance (not the belly kind) for ten minutes and that was the end of entertainment. But, none of them were delivered. Many party goers had to stay on empty stomachs when dinner ran out at 10PM. 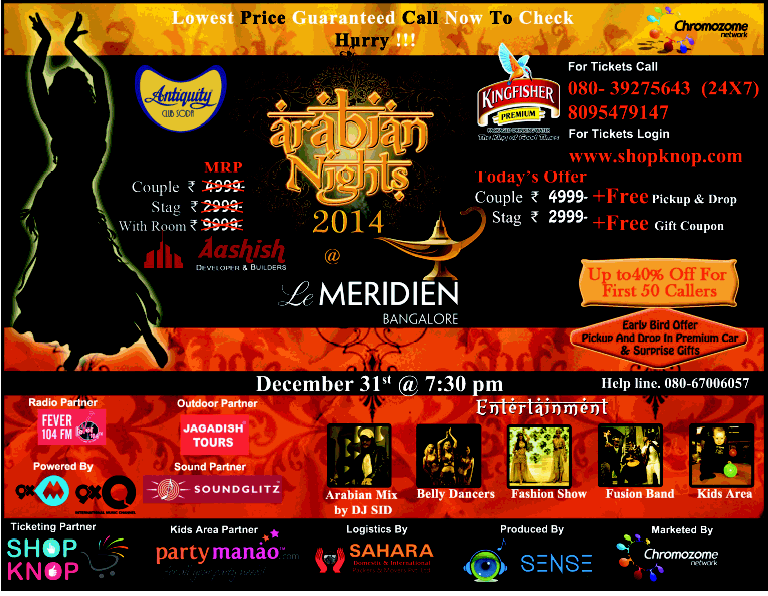 Later in the night, many party revelers stood up against the management but to their dismay, organizers fled and hotel management turned a cold shoulder saying there is nothing they could do. Fights erupted when party revelers started destroying the property but police’s swift action prevented untoward incidents.

Le Meridien, by virtue of its 5 star status had collected Rs.5000 for a couple and Rs.3000 for stags. They collected money and put a tag around the wrists for some 500 party goers without issuing a ticket.

Many were stranded in the night without a transport to get back homes and the hotel staff shut shop and were absent from the scene. The police did not want to intervene either.