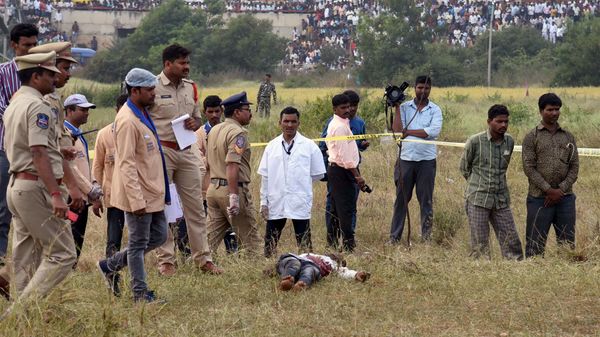 You have a gruesome gang-rape and murder, and four suspects who have confessed to the crime. They are interrogated by the police and during the wee hours of 6th of December are taken to the spot where the crime was committed to confirm certain details.

All the four suspects beat up the police and started to run towards their freedom across an open parcel of land. The policemen regain their senses and start firing at the suspects. All four and wounded and killed.

The news becomes major headlines of the day. Both the houses of the parliament debate it with the right groups taking a stand against the suspects and the opposition standing steady with the rapists and their right to justice and life. Not only the parliament, the country breaks its silence on this issue. Many liberals move towards defending the rapists while a majority show a glee of satisfaction about the news of the rapists meeting a swift end.

Parallels are drawn between Disha (the Hyderabad victim) and Nirbhaya (read: why is rape endemic in India). Some of the living rapists in the Nirbhaya are still breathing and are still in jail with no in end in sight. And here in the case of Disha, within a week, some feel that justice has been delivered, and some are on the other side of the fence.

Truth be told, I woke up completely when I read the headlines on the TOI news app and I felt relieved (more than happy). In India, delivering justice becomes a bane of sorts with the slow wheels of judiciary dragging appeals and counter appeals along and in the meantime, the persons behind the crime having died a natural death or being thoroughly entertained moving from one court to another.

The first question I ask today, is whether the encounter was just a cover for killing the heartless rapists and murderers. Lets examine some facts.

Given our slow paced judiciary, and given the public anger against the suspects, the justice meted out by the police has largely been welcomed by the masses, because somewhere deep within, we want justice delivered during our lifetimes. On the flipside, we are all aware that this is not the law, and by law, the four would not have been killed today (maybe ten years from now). The swift justice along with the manner throws open plethora of questions aimed at executory powers and the protection of its citizens.

The second question I ask is whether executive lending a helping hand to the judiciary any good.

Let’s say for the sake of argument, that the four suspects who were behind the rape and murder were framed by the police because they needed somebody to pin the crimes on. And before the frame-up could come out into the open courts, the police wanted to cover it up covertly through an encounter. In this case, can we say that the justice was delivered? Because we know only one side of the story, and the other side might have revealed some interesting facts. In this case, I have seen reports that suggest that the family members of the suspects have thrown negative light which confirms the police’s story rather than a frame-up (which I am glad for). The last thing we want to see is this turning into a model for other police forces to mimic and get heralded by the public.

What has happened has happened. There will be a lot of questions in the coming days. The courts will examine the encounter killing more closely than the actual crime. More left leaning people will turn up supporting the rapists rather than empathising with the victim. This is India where the right leaning people are quick to come out in the open and as days pass by, and as more facts emerge, the leftists worm out of their holes towards voicing their opinions.

Final Word: I am happy about the encounter killing of the four suspects. However, we must have laws that protect suspects from the police to prevent such killings in the future. Not all the time, things would turn out to be black and white. The aspiration of justice must be to seek the truth and at a pace that makes justice relevant.

Inspired by @ShekharGupta's #CutTheClutter, I have started a new series #CutTheDigitalClutter. In the first of the series, I unravel GitOps. I hope to do one video a week to start with. Hats off to @ShekharGupta for doing a CTC every day. #Respect

What is GitOps? How is it Different from DevOps? | Cut the Digital Clutter https://youtu.be/r1JznmidUjY via @YouTube #cutthedigitalclutter #gitops #devops

Are You Not Able to Find a Job? Here is the Reason! - http://abhinavpmp.com/2021/09/18/are-you-not-able-to-find-a-job-heres-the-reason/ #jobsearch #unemployment