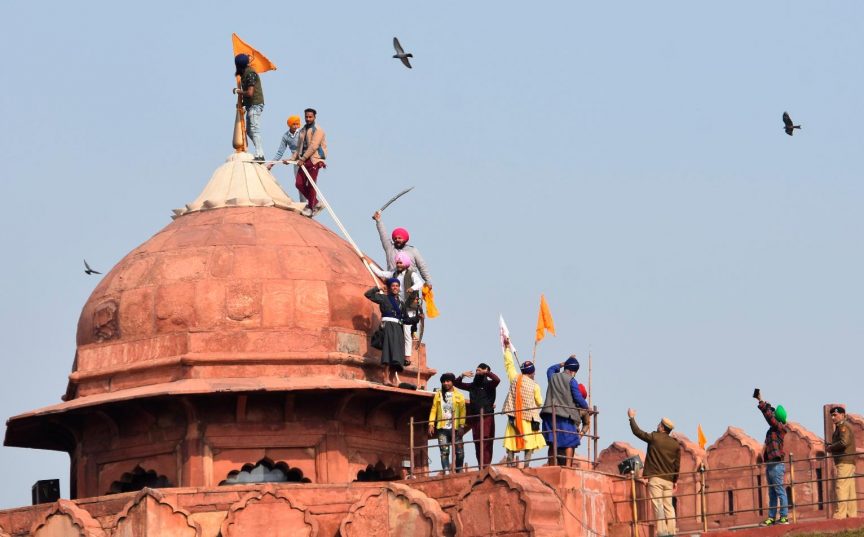 26th of January is sacred for the Indian state. It is sanctimonious for what India stands for. On this day, Indian farmers have committed crimes in public glare and have left a taint on India, the republic.

The two month long peaceful protest was to follow up with a circuitous tractor rally. The routes were designated by the Delhi police and the farmers had agreed. But what followed was heartbreaking.

The farmers broke through the barricades using tractors as war tanks, they not only mowed down steel barricades but also the policemen on duty. They wielded their swords and swung at whoever came in their way. They destroyed public property including buses and railings which is paid by the Indian tax payer. They used the rods to attack not only the policemen but also the media and general public.

A TV reporter from an irreputable channel walked with a few farmers as they destroyed property. They told him that their plan was always to enter Delhi and cause mayhem. The garb of a tractor rally was a ticket for a foot in the door.

The Punjab farmers who have committed criminal acts have brought disrepute to India and to their profession. Most Indian farmers are peaceful in nature but the farmers from the agrarian state that shown a penchance for violence, disregard for rules and policies, and have lost all credibility.

What started as a protest against farm laws for inclusion of minimum support price has been a moving goal post. Even with the government agreeing to their demands, they have only moved the goal post further in order to continue protesting and causing destruction along the way.

A criminal farmer died today and his tractor had toppled. Other farmers told India Today news channel that the police had shot him dead. In the next hour, the police released a CCTV footage which captured the killing. The farmer was driving the tractor at a high speed and wanted to topple the barricades placed on the road. The tractor which is not meant for such destructive behaviors turned turtle and the farmer was crushed during the impact. Lies and deception have been at the midst of the riots and this is further proof that the Punjabi farmers who are involved are criminals and rioters.

Indian opposition to the likes of Arvind Kejrival and Rahul Gandhi who have supported the farmers even after their criminal acts, blame the government for not having sufficient security. If the government had used rubber pellets and water canons, then the very same people would’ve blamed excessive force against hapless farmers.

The most shameful episode was the Indian farmer holding saffron and other religious flags broke through to the red fort and the Delhi police had to brace for cover. They rammed into red fort with ammunitions and swords and flags. They brought down the Indian flag and raised a religious flag in its place. This is sedition of the highest order.

Hapless is the furthest word you can use for these criminal farmers who have shamed India and left a scar so deep that the Indian public will no longer hold the farmers in high regard. Sadly though, majority of Indian farmers who are happy with the new farm laws are facing the brunt with its suspension and also their credibility has taken a irreparable hit.

It is time for the Indian government to act stringently against these criminal farmers who have taken law into their own hands. What difference is there between the Punjabi farmers and the stone throwing Kashmiri youngsters. Both should be treated equally and with force.