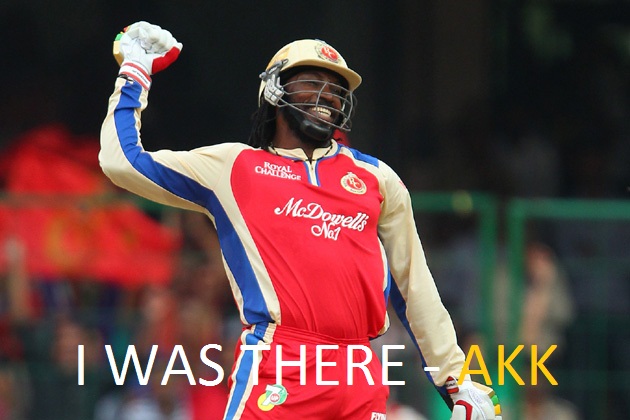 The M Chinnaswamy stadium in Bangalore was almost full, and the estimate is about 40,000 people. I was one of this select group of people to have witnessed a black man marauding a group of hapless international class cricketers. Christopher Henry Gayle rewrote cricket history and I was one of the onlookers.

The weather forecast predicted rains at 4PM and it didn’t disappoint the weatherman. It started drizzling eight balls into the match. By then, Gayle had made his intentions known, hammering two fours of Ishwar Pandey’s first over. We lost a little over twenty minutes but that didn’t hinder Gayle’s plans. He defended the first ball after the stoppage and blasted three more fours in the same over.

Dilshan on the other end was struggling, getting beaten and hitting straight to the fielders. I wondered if both the Royal Challengers Bangalore opening batsmen were playing on the same piece of 22 yards. Dilshan’s set of problems did not bother Gayle even a tiny weeny bit. He started sending the ball into space as if earth had lost gravity and he was playing against a B division school team.

Spectators cheered for every six by standing on their feet and waving the red RCB flags. At one point, when sixes were the order of the day, they stood standing and continuously waved the flag predicting that every ball that Gayle faces goes the distance, and their premonitions proved right time and again.

Fours were sparse and in between. And when they were scored, spectators just let it go. They neither applauded nor acknowledged the good shot that brought about the boundary.

The towering sixes gave us something else to cheer about, the likelihood that the ball would come flying onto us. And it did. I was sitting in the P1 lower pavilion aka blackdog lower pavilion stand. The stand is in the ground level, beside the sight screen. We were seated around twenty feet from the boundary. One six landed three seats to my left. The excitement that the ball actually came close enthralled my friends and I. One of my friends claimed that he touched the match ball!

I was paranoid throughout the game about the weather in store. Although the forecasts predicted rains at 11PM, I kept staring at the dark skies. The clouds started to get darker around the 15th over. The LCD display started beaming “Declare???”. I thought it was a great idea. By this time, we had scored 200, and the last thing I wanted is not make this effort count. I wished Kohli would be the first T20 captain to declare the inning in view of the incoming rains and possibly getting a result. Not to be.

When Pune Warriors inning got underway, I could feel a couple of water droplets hit my skin. I knew we had to get the mandatory five overs in. To my surprise, Murali Kartik was entrusted to bowl the first over. I was happy that Virat read my mind and decided to finish five overs quickly through spinners. Not to be. Kartik bowled just the one over and it was up to Rampaul and RP to run through the rest of the powerplay overs. When five overs were bowled, I relaxed and one of my friends said that I am acting like the villagers from the movie Lagaan.

We knew that the match was done and dusted even before the RCB innings was complete. But, the way Pune Warriors surrendered to us was appalling. None gave a fight worthy of the opponent, that being said, there are twitter jokes going around that Gayle is not human. I wished that the team chasing was Chennai Super Kings and we would have had a match on our hands, and a relishing thought about seeing CSK lose would be sweeter than most RCB victories.

I predicted in the 19th PWI over that Gayle may be given a bowl and it was to be. A couple of wickets, Gangnam dance, throat slashing gesture and begging on knees for a LBW decision gave the match a climax that would overpower most Hollywood entertainers. I am playing fantasy cricket on IPLT20 competitively. I had made Gayle as my captain. So, the runs scored and the wickets he took bumped me in the fantasy league table by several thousands.

The bag of tricks that Gayle can produce out of the hat, especially after a sedate inning against the Royals is exemplary. His technique is simple – stand in the crease, see the ball and hit. The timing and power are innate. The combination of his technique and birth gifts makes him the most feared cricketer in the modern day game.