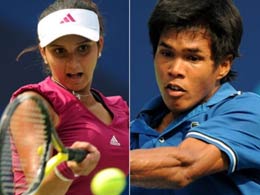 Sania Mirza, Rushmi Chakravarthi and Somdev Devvarman were award wildcard entries to the Olympics in the ladies’ doubles and men’s singles. They join Mahesh Bhupathi, Rohan Bopanna, Leaner Paes and Vishnu Vardhan who were selected to play for India by AITA.

The strong seven contingent is the biggest ever for India in tennis in the Olympics.

The big team that India would take into the premier sporting event is perhaps not the best combination to win medals but makes up for the number anyway.

The criticism surrounding Bhupathi and Bopanna not willing to partner Paes was blown out of the proportion some ten days back. In the team event, it is crucial that the trust factor stays critical. And, while Paes has the notoriety of back biting, it is perhaps not fair to pair him with top Indian stars who don’t believe him even for what he’s worth.

The pairing of Bhupathi and Bopanna is the right way to go about it, although on paper Paes outweighs Bopanna but paper tigers don’t win a dang medal.

Paes is playing for pride, and the person who has made the most of the confusion is the young Vishnu Vardhan. This chap would not have dreamed about playing in any ATF tourney, let along Davis and Olympics. Representing the country is a huge honor and hope this gives him the push to perform on the big stage.

One last thing that needs some clarification. Can an Indian stay an Indian if she marries a foreign national? I am referring to Sania Mirza if you haven’t figured it already. Married to a Pakistani, can she play for India? While she is selected and allowed to play for India, would she be playing for her country or pride? My doubts linger about for as long as the ladies doubles team does not play reasonably well.