Akshay Kumar has hit a purple patch, blossoming low budget movies into blockbuster hits.  First, it was the Paresh Rawal produced OMG Oh My God! and this time around, it is Special 26. Kumar has rarely flopped last year, to the likes of Joker.

Special 26 is based on a true story, a real life heist that was carried out in 1987. The movie is inspired by the heist as the producers of the movie claim. 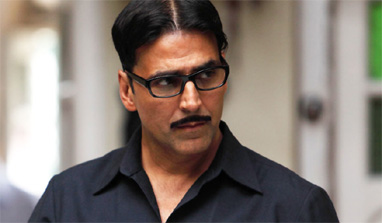 On March 19th, 1987, Tribhovandas Bhimji Zaveri in Mumbai was robbed by a single man – Mon Singh – identifying as CBI. Singh apparently conducted fake interviews to hire 26 recruits into CBI and told them that a mock raid had to be conducted to confirm their place in the security agency. They did as they were told, they bungled out the jewelry store in half hour, and Singh disappeared with the loot, not to be caught until this day.

The movie starts with Ajay Agarwal (Akshay) and PK Sharma (Anupam Kher) interviewing candidates for the CBI. The movie then winds around to a raid that is conducted on a sitting minister by the fake CBI team, with the help of a police. The police inspector (Jimmy Shergill) is fooled into believing that this gang is the real CBI and help them raid and loot money from the minister’s house.

The real CBI headed by Waseem Khan (Manoj Bajapayee) launch a manhunt to nab the CBI posers. He is ably supported by Shergill and the reminder of the movie is around the cat and mouse game between the CBIs.

Anupam Kher’s acting is awe inspiring. Akshay and Manoj have acted excellently as well. Casting on a whole is well thought out and pitch perfect.

Neeraj Pandey’s direction is crisp. He never lets the audience’s concentration drift. Music is well below average with Keeravani and Reshamiyya looking like mere amateurs.

Kajal Aggarwal is wasted in a role that is handmade for the sake of romance. Perhaps her role could have been eliminated and a Mallika Sherawat starrer item number could have done a lot more to the movie.
Yet, with all these drawbacks, this is a movie to watch. I believe that Special 26 is the Indian Ocean’s Eleven and has matched the Hollywood blockbuster in every step of the way.