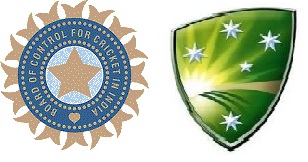 India was battered black and blue by the visiting English team two months back. Morale of players is at an all time low. They are desperately praying for mother luck, to turn the LBW decisions in their favor, edges to carry cleanly into the hands of Indian fielders and the movement to die when Aussie bowlers are on.

MS Dhoni is a worried man more importantly. His position is being questioned time and time again in this format. He knows deep down that he is not captain material for Tests. Somebody like Virat is perhaps better suited. The confidence, or the lack of will hit India badly in the upcoming match.

India took a backward step by selecting Harbhajan Singh for the first two test matches, and he will likely be in the playing XI in both the matches. The Indian offie has lost all his charm and clout, and bringing somebody back due to lack of choices is like wearing dirty clothes as no laundromats are close-by.

India is likely to go with three pronged spin attack to support Harbhajan’s menial comeback into the team. Pragyan Ojha is perhaps the lone spinner capable of suprising the Aussies while R Ashwin, just like Ajanta Mendis, is found out and is a piece of cake on the playing field.

Ishant Sharma will be the lone fast bowler and is expected to do some early damage. But, on a Chennai wicket, where the pitch absorbs at least a third of a speed before delivering it to the batsman.

Batting looks like a mixed bag with the likes of Virendra Sehwag, Virat Kohli, Cheteswar Pujara pumping with confidence while Sachin Tendulkar, M Vijay and Ajinkya Rahane coming off of ordinary seasons with nothing much  to show off. Shikhar Dhawan is the X-factor, and could just be the factor to surprise the Aussies.

On the other hand, Australia is pumping fists with the inclusion of Moises Henriques in the XI and Shane Watson back in action. Injured Warner and mediocre captain could just be the luck India is looking for. They are going with a lone spinner in Lyon.

Australia too have some worries with their below average performances in the warm up games.

The Chennai test will be a test of luck, a test of which team falls first rather than which team will end up excelling. The weather will be merciless, especially for the Indian team which practiced in Bangalore, which is way cooler than Chennai.