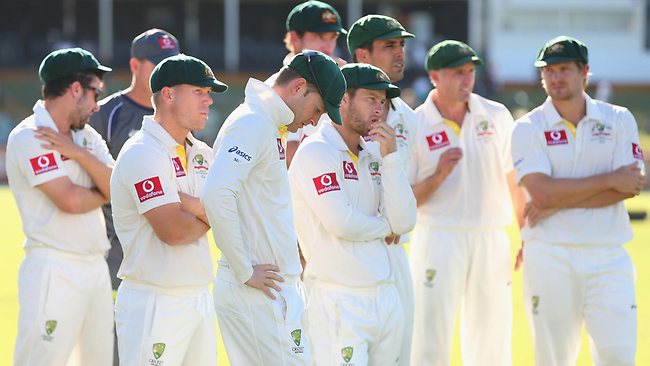 Aussies are known for their never say die attitude. The past twenty years has seen players who have excelled and have held great esteem among players from other countries. Not just the image, players from other countries sweated to see certain names on the list. The table has turned topsy turvy and we are witnessing the weakest Australian team since the world series.

Australia were almost shot out by an innings in the first test. The general perception was that they were getting used to the conditions and speculations were rife that the Aussies were preparing hard for the Hyderabad encounter. They made some brave changes from the first test. By the end of first day, we knew that they had floundered and are looking down the barrel. The rest of the two and a half days was confirmation of the crass play.

For starters, they bank on Phil Hughes for the No.3 spot. This lad is like a touch-me-not kind of a cricketer against spin. Every single inning including the warm up games, he has gifted his frail wicket to the Indians. Why bring somebody like this to India to play Indian spinners? Did the Australian selection team including the coach and captain not know that this kid could play pace only. Extremely poor judgement.

Dropping Nathan Lyon for Xavier Doherty is a crime, especially when Indians are playing three spinners. Australia should have played both spinners, although the latter may pose no serious threat. He can still perhaps contain and get through his overs.

Australia are missing a good opener. David Warner might be a havoc in T20s but in the real cricket arena, he is a lame duck. They need somebody in the likes of Matthew Hayden who can bludgeon the ball and stay on to make centuries. The other lad Ed Cowan has something in him, even if it is worth the thirties and forties, it is still better than most Aussie batsmen, although he is a suspect against as well.

Adam Gilchrist was like Jesus. He was a moral model on the field and held the team together by chattering his way into glory behind the stumps. His batting prowess matched the Steven Waughs and Ricky Pontings and was a dependable man at No.6. Matthew Wade is ten classes lower than him, perhaps more. Is Wade the best Australia can do for a keeper?

The captain is as good as his team. Michael Clarke has been a star with the bat but whatever he does is going to dogs with the rest of the team pulling his weight down. He has come here with a weak team, he had better choices to make but he went for some of his favorites such as Hughes and is paying rich dividends. It is time that he calls the chief Australian cricket selector and calls for an emergency selection committee meeting before the next match begins.