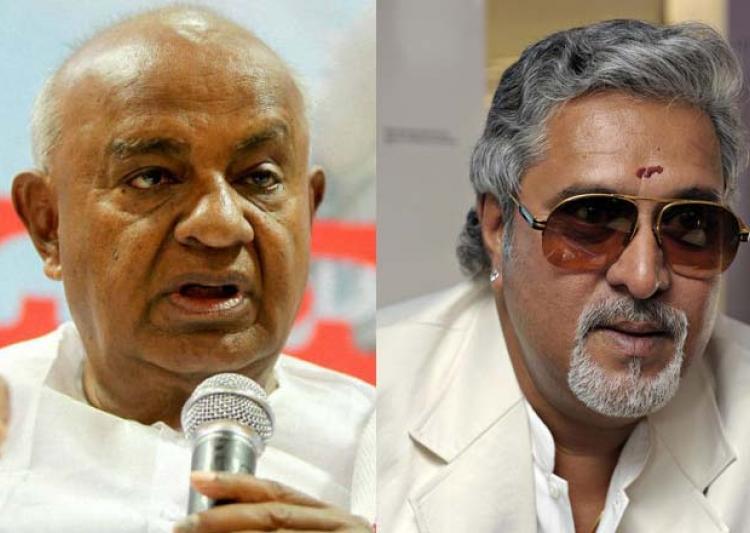 Deve Gowda, who served as the prime minister of India for less than a year in the previous century has come out in defence of beleaguered businessman Vijay Mallya.

The former PM said that mistakes do happen, and Mallya is not somebody who would abscond as he is the son of soil. He was quoting directly from the tweets that Mallya posted a couple of days back.

His reasoning was quite absurd – Mallya came from a reputed family and was born in Karnataka, so there isn’t a tiniest chance that he would take the Lalit Modi route.

Why did Gowda defending the person who has rendered thousands jobless, salary less and owes several crores to state banks. To add to it, there is also the allegation that service taxes that were charged from customers were not paid to the government, but instead, siphoned off to offshore accounts.

Mallya was nominated twice as an independent to Rajya Sabha by JD (S), the party that Gowda and sons chug the wheel. And, Mallya has left the country using his diplomatic visa, which comes along with his position as MP. So, any kickbacks to Mallya gets aimed at those who sent him to the upper house.

Mallya is no son of soil. In fact, somebody who is true to the country would never abscond, after getting a hefty payday for selling off his company. I believe that the entire episode spanning the pay check for non-compete agreement was scripted to the tee. Since it is a publicly traded company, the agreement had to come out in the open. Else, it would have been a hush hush affair, and the media would not have got a chance to launch a snarl attack on him.

Businesses go bad most often than not. But, it is the lavish lifestyle that Mallya lead which agitates the nation, the salaries that were withheld that enrages the crowd, and the large sums of money going missing from Indian government coffers that infuriates the media.

Mallya’s partner in Force India venture, Subrata Roy Sahara has landed in a similar soup of owed money, and is currently in Tihar jail for the past two years. Why is Mallya still outside? Maybe, the only distinction between the two is the MP status. Maybe Mallya forethought the required badges before hand!

It is time to cough up what is owed or face the music like everybody else. The son of soil does not get exemptions, not here, not in any other country.