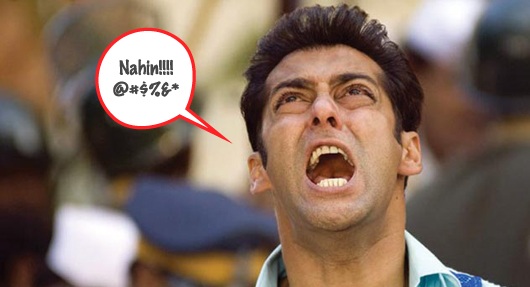 In the recently held annual Ghanta awards ceremony at the J W Marriott hotel on February 15, Salman Khan was adjudged the worst actor for the year 2012. He earned this award due to his terrible performances in Ek Tha Tiger and Dabangg 2.

Salman’s co-star in Dabangg series, Sonakshi Sinha was not left behind to be voted as the worst female actor for her performances in Dabangg 2, Rowdy Rathore and Joker.

Surprisingly, both the actors did not show up to the ceremony to receive the awards. 🙂

In the other categories, Son of Sardaar, the movie that reaped on controversy was adjudged the worst movie of the year. Ajay Devgn was missing from action as well.

The worst remake honor went to Agent Vinod – Saif Ali Khan must be bummed. And, the worst sequel was a giant tussle between Dabangg 2 and Housefull 2. In the end, the latter grabbed the limelight.