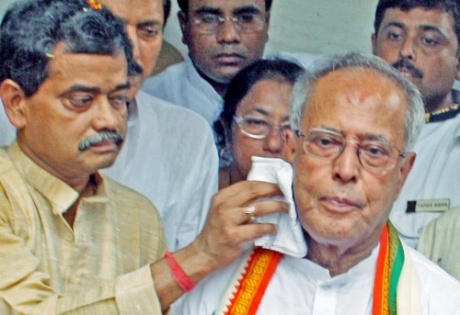 The son of the president of India, Abhijit Mukherjee, who is an MP from West Bengal perhaps didn’t see a soothsayer before he uttered the following words in front of glaring cameras – “those who are coming in the name of students in the rallies, sundori, sundori mahila (beautiful women), highly dented and painted”.

He was referring to the women who are protesting for a week in Delhi. His argument is that these women dress up for discotheques and prestigiously get involved in protests such as the recent one against gang rape victim.

The timing of the President’s son blasphemy is awful to say the very least. The entire nation is burning against the injustice caused to the 23 year old girl, and people across walks of life are openly supporting the victim, going as much as demanding capital punishment for the culprits. And, our president’s son chooses the very same topic, chooses to target the protesters, on their dressing, on their extra cultural activities, and does not blink until his father calls him up.

Bravo, Mr. MP. You have made your constituency Jangipur proud. I am wondering how the people who voted for him are reacting. Are they kicking themselves on their butts for voting for a candidate who is a sexist heartless insensitive brute?

Everybody are entitled to their opinions. It is not wrong to state one’s own opinion in public, you have the right to freedom of speech. But, as a person who is representing a portion of India, is it sensible for a member of parliament to be as callous as in this case. I agree that he may opine that women who participate in these protests were dancing off, with make-up and having fun on the day of the crime, but that is his opinion, he should have kept it to himself. None of us woke up this morning wanting to put a lie detector on the president’s son to reveal his thoughts. His statement has hurt the sentiment of people who respect politicians. I am sure others (like me) would not take him seriously and shrug by saying something like – “I am sure these statements are nothing for him. He would gave filtered most of his opinion and would have stated the least sensitive ones. Forget thinking, he would have done worse things in life that we don’t know.”

The latest development as of this evening is that Abhijit’s President father and President’s daughter, ahem, his sister called him up and advised him that his image (and their family’s) is at stake and he has been careless in choosing the inopportune moment to share his piece of mind. They wanted him to apologize unconditionally and he duly did so. Not because he felt sorry nor he wanted to, but since his President father ordered him to.

I find it hard to believe that his party, Congress, would give him charge of their upcoming campaigns or even ask him to join the brass on the stage when Sonia or Rahul or whoever visits West Bengal.

I condemn the statement put forth by a member of parliament. Although my writing is satirical, I hate the guts of the MP with vehemence and hope that such people do not make it to any office that holds value in the Indian constitution. I also know that Indians have a short memory, and would forget everything that had been said on 27th of December, 2012 when elections come calling in 2014.