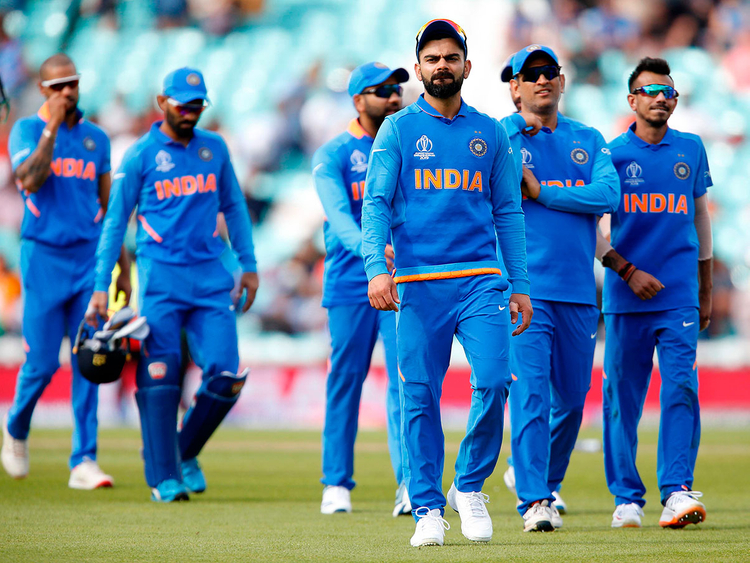 India came into the world cup campaign with a reputation. They went through the league stage like a juggernaut destroying everything that came their way. The match against England was not a blip because they didn’t feel like helping their terrorizing neighbor. They topped the league in style on the back of consistent and charismatic performances by the top order batsmen and fast bowlers. And then the rains arrived only to postpone the Indian batting to the reserve day. The moisture under the pitch covered for the most part did its part in assisting the below-par Kiwi bowlers. Indian batting was ripped apart and the league toppers were staring at an early flight back home – shattering a billion dreams. For what? What are the real reasons? Who should we blame?

Is it the No.4 Position?

A number of batsmen over the years were tried and tested at No.4 but none of the experiments bore fruits.

Kohli jumped the gun and named Ambati Rayudu as India’s No.4. It didn’t find favor with Shastri or with the selection committee. Rayudu was ignored from the entire squad, but gave him a consolation recognition as a world cup reserve.

Experiments continued during the world cup campaign as well. KL Rahul, the flamboyant opener in great touch or Vijay Shankar, an unknown commodity were to don this coveted position.

KL’s century against Bangladesh during the warm up match sealed the deal in his favor.

Australian Pat Cummins threw a spanner in the works when he broke Shikhar’s finger. KL was moved to his favored opening position leaving the No.4 position orphaned.

Shankar who donned this position came to nought and then found himself toe wrecked by Jasprit Bumrah.

Rishabh Pant looked decent in this position but he looked mostly uncooked and batted like a lower order position.

The No.4 position is a critical position and comes into play when the top order fails. The consistent performances of the openers negated the need for a strong No.4 until the semi-final match against New Zealand.

The Indian team management should be looked seriously at an experienced player to don this position when KL was moved into the opening position. In the current squad, experienced batters include MS Dhoni, Kedar Jadhav and Dinesh Karthick. None of them were considered for this position. Instead Shankar and Pant who are the most inexperienced were given the keys to batting stability – which would be looking down the barrel.

In my view, Jadhav having been a regular for the past few years was the best fit when KL had to move up. Dhoni’s ability to get stuck and Karthick’s inability to build innings stood against their nomination to this spot but Jadhav looked the most formidable but was never tried. The Indian team management missed a trick and this could be a reason why the batting failed to click on the day it mattered.

Is it Dhoni’s Position?

Dhoni came in at No.4 when India won the trophy eight years back. India lost 3 wickets with 5 runs on the board and fourth fell shortly thereafter. Yet, there was no Dhoni. Many critics feel that Dhoni’s presence in the middle earlier than No.7 (when he arrived) would have turned out differently for India.

Let’s face the truth. Dhoni has passed his prime. He is no longer a bat bearer like he did in 2011. He no longer has the ability to meet the ball sweetly to see it sail over ten rows back. The same critics who asked for his sacking before the world cup are bawling over his positioning in the match that India lost.

Dhoni did score handy runs against New Zealand but this was an outcome of confidence boosting Ravindra Jadeja’s innings. Whether Dhoni could have on his scripted Indian victory at No.4 or 5 will start the guessing game where more questions are being raised than answers.

I do not believe that Dhoni if sent earlier would have had a positive effect on the overall score.

Is it the Decision Making Process?

There are reports emerging from unknown sources that there are rifts in the Indian team. Apparently the team has two power centers – one led by Kohli and the other by Rohit Sharma.

Kohli is obviously backed by Shastri else he would have been fired just as Kumble if he didn’t tow Kohli’s line.

The accusation by the Sharma camp is that the decision making in this Indian team is unilateral. The entire team is not consulted with the decisions made. There is plenty of favorism in the team. Rayudu was dropped for KL despite KL having a topsy turvy career. When a spinner needs to be dropped, it’s always Kuldeep Yadav and not Yuzvendra Chahal (because Chahal plays under Kohli in the IPL).

These rifts could be genuine. Sharma might feel left out from the decisioning process having donned India colors before Kohli.

Kohli trusts certain people, people who he looks up as mentors. Dhoni is one of them. Any advice coming from them may influence the final outcome but not the opinions of the rest of the team. His style of leadership does not allow him to be a consensus builder. Being a leader, he goes with his guts and this could have rubbed seniors (such as Sharma) the wrong way.

But the Indian team is made of mettle that stays professional on the field and leaves behind the off-field issues to be dealt with in the dressing room. India losing the match in the semi-final and the unilateral decision making has no bearing on each other. They just are discrete issues.

Or is it just Poor Batting?

If you look at it closely and with untainted glasses, you will find that our failure to catch up with the Kiwi score was because we failed to bat well – the top order collectively fail to gather 3 runs for as many wickets. When this happens, more often than not, the side ends up getting fewer runs, even fewer in world cup pressure situations.

The truth behind India’s exit in Kohli’s own words – 45 minutes of bad cricket.

Students of statistics will tell you that the probability of all aces showing up in a sequence is quite low. Likewise the probability of Indian top order collectively failing was not expected but it happened. Things such as this happens. One of the reasons that Indian batting failed is because of the incessant rains on day 1 and with Boult delivering inswingers to right handed batsmen, it was expected to be tough and challenging. But, the extent of him nipping the top notch batsmen was unprecedented.

What’s the Road Ahead?

Indian fans are traumatized. They had worked out everything up to the final and New Zealand match was just going to be a formality. The rude awakening when the beast of cricket of bumped off the cricket main road has left the Indian commenting faculty (read everybody who watches the game) highly opinionated.

Most are baying for Dhoni’s blood, perhaps because of his indifferent batting earlier in the series and in a few matches prior to the world cup. I think it is unfair to finger point Dhoni when the team has collectively failed, and that too for a brief period in a match. If somebody needs to be blamed, it should be Kohli and Shastri, and to some extent the selection committee headed by MSK Prasad.

Going ahead, India has a lot of cricket to look forward to starting with the Caribbean. Here are some priority things that should happen to restore the confidence of the biggest stock holders of world cricket: