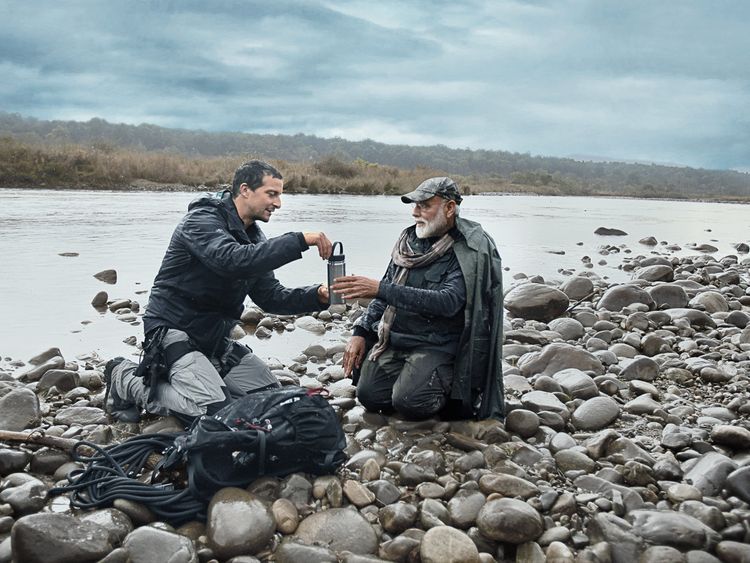 Man Vs Wild featuring PM Narendra Modi made history with Discovery capturing the top spot for viewership with 3.69 million impressions. The premiere made records in the infotainment genre with 6.1 million people having tuned into the program.

But viewers were in a quandary over a particular aspect. They saw an active interaction between PM Modi and Bear Grylls, the ultimate survivalist in Hindi and in English. Bear has not professed to understanding Hindi, so how did the communication (especially from Modi’s Hindi to Bear’s English) happen?

A lot of chatter on the net suggested that the questions and interactions were scripted, and Bear knew what the prime minister would say and based his responses were based on that. Some suggested that the shots were edited between the conversations which was unlikely going by the footage. And very few, I repeat, a minuscule set of viewers said that some technology was used for instantaneous translation from Hindi to English – something that we can realistically do with various translation tools.

The secret is out. PM Modi has revealed it in his August 2019 Mann Ki Baat show. The minority viewers who guessed technology behind the translation are right.

The prime minister said that a tiny instrument was lodged in Bear Grylls’ ear which was not visible to the camera. It instantly translated everything that Modi said in Hindi allowing for a real time conversation to take place between the two.

“Whenever I spoke, it was instantly translated into English. Bear Grylls had a small cordless instrument in his ear. So I used to speak in Hindi and he heard it in English… the communication became very easy. This is an amazing aspect about technology,” the prime minister stated on Mann Ki Baat which aired on 25th of August, 2019.

Modi further said that conservation of nature and cleanliness are two towering causes that are close to his heart. Through the Man Vs Wild show, he hopes that he brought limelight to nature and particularly North Eastern part of India which remains to be lapped by tourism.

The show featured on 12th August in India and on different days within a week across the world. This is the only Man vs Wild show that was translated into multiple languages and aired with record numbers across the globe.