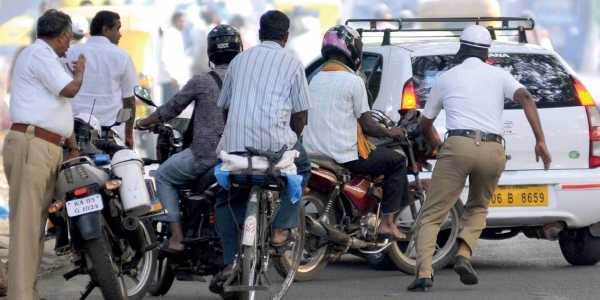 The New Motors Vehicle Act (NMVA) 2019 has captured plenty of news worthy moments already. The quadrupling of fines in most cases has been savage to say the least. It has ripped through people’s pockets, in some cases more than the value of the vehicles that they were caught with.

Meet the truck driver Ram Gopal from Gurgaon. When traffic police hailed him to stop, he pressed on the gas and try to escape. He was caught and it was found that he did not have a driving license nor any documents pertaining to his vehicle. Eight other violations were tagged on – lack of fitness certificate, insurance, pollution certificate, dangerous goods, dangerous driving, disobeying police orders, jumping signal and disobeying traffic signal. Guess how much he was asked to shell out. Rs. 59,000. His vehicle was impounded because he didn’t have the money on him.

An auto-rickshaw driver who’s name was not disclosed was fined Rs. 47,500 after being caught drunk among a host of other violations. Another drunk two-wheeler driver in Bengaluru was fined Rs. 17,000 after he was caught riding without a helmet and a valid driver’s license.

The list of violators and the associated numbers are numerous. So are the memes.

For those of us who drive in India aren’t strangers to fellow motorists flouting rules. Many a time, they end up causing traffic jams or worse – life threatening wrecks. Especially if we pride ourselves of stopping at all the red lights and following road rules to the tee, we are probably the happiest to see them caught and fined to their bone.

These heavy fines can potentially end a motorist’s lifestyle. Imagine an auto-rickshaw driver fined Rs. 40,000, how many more months does he have to work to save and pay the fine. If he is unable to pay, his vehicle gets impounded, taking away his means of an income. On the flipside, the news about the new fine slabs are making the news for a while now, and the driver indeed knew that if was caught, he would be made to cough up heavy. Yet, he chose to violate the rules! In all probability, it is not the first time he had violated rules, and I go the length calling those who are fined heavy as generally serial offenders.

If reports are to be believed, most junctions and areas which witness heavy flouting of traffic rules have seen increased levels of compliance. This is proof that the new fine slabs are making a presence. Smooth traffic, controlled level of pollution and reduced crimes are some of the direct benefits that are outcomes of the new slab of fines.

There’s always a yang for every yin. The people who fine and collect fines are possibly not saints (not all of them at least). This could lead to increased corruption with offenders being let off for a percentage of cash payment without a challan.

So every good deed will have a polarizing negative component waiting to happen. The new set of fines, although overt in spirit shall be bogged down by corruption in the system. The government should further find ways to weed corruption out of this new system by setting collection targets, educating motorists and setting up CCTVs at dense junctions. These are perhaps some of the ways that the government can deal with the double edged sword that the high fines brings into the system.